According to my Fitbit, I’ve walked over 12 miles today.

We started off our morning taking the metro to meet Olya, one of our facilitators, to go to the notary and sign some documents. I’m surprised our facilitators have asked us to meet them via the metro, as in the past, with our other adoptions, we’ve always had drivers pick us up and take us where we need to do. That being said, I’m happy to take the metro, as it’s much cheaper and more adventurous.

This was a quick visit and we were done with paperwork! Our facilitator asked if we were going to go back to the apartment, and we said, no way! Beautiful day in Kyiv, we were up for adventure! She helped us purchase tickets to the St. Sophia Cathedral belfry. If you’re ever in Kyiv and are able to climb stairs, do this. 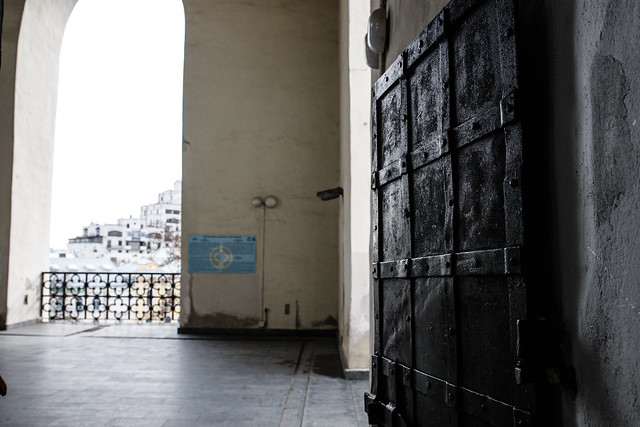 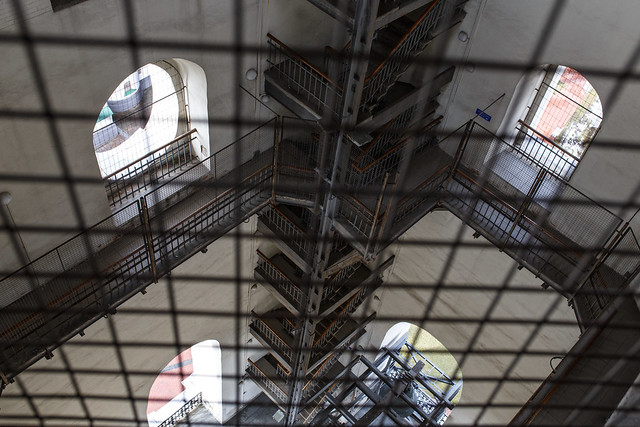 A three photo panorama from the top of St. Sophia’s belfry.

We could have purchased tickets to go inside the complex, but I had some other ideas of what I wanted to do today. 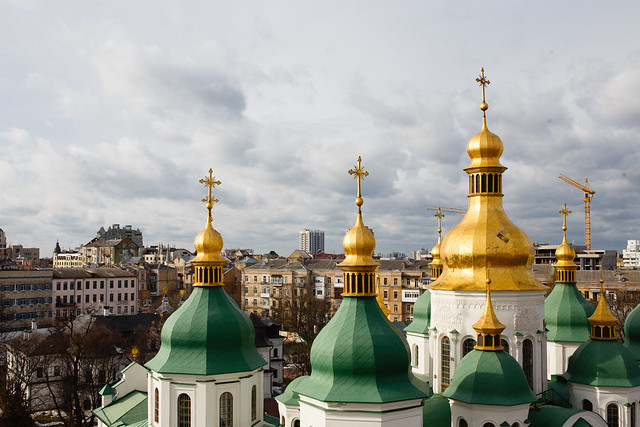 That gorgeous, ornate blue and white building with the gold dome is the one that we climbed. 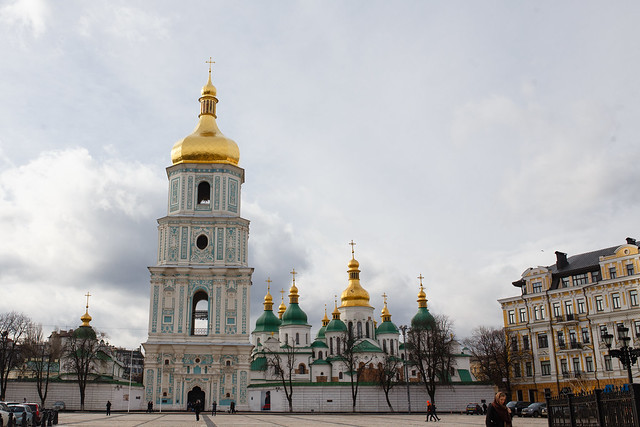 After all this walking, I needed to give my legs a bit of a rest, so we decided to get lunch. I saw a pizza place by the metro stop, so we headed there. We have only eaten Ukrainian food for the last week, so this meal was the most typical of what we’d eat at home (not that we eat a ton of pizza at home).

I wanted to go to the Pechersk Lavra Monastery and the Motherland statue. I thought it might be fun to go a longer way, walking back through the area where we had been last week and down the huge hill to the metro.

St. Andrew’s church again, right next to the building where we were last week to get Lyuda’s referral. 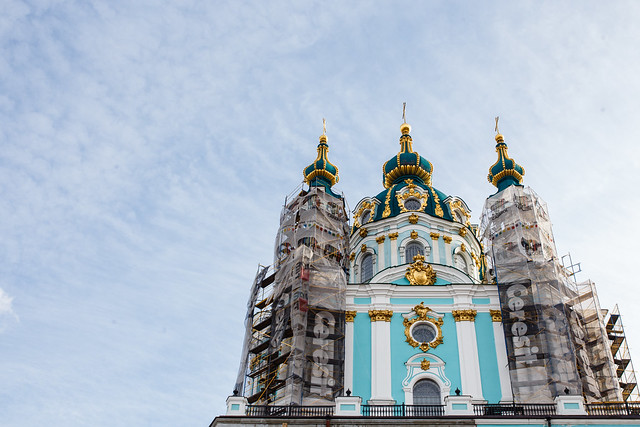 A little street you can walk down where artists sell their work. I would love to bring home a landscape of Kyiv from this little street– I just have to figure out how to transport it! 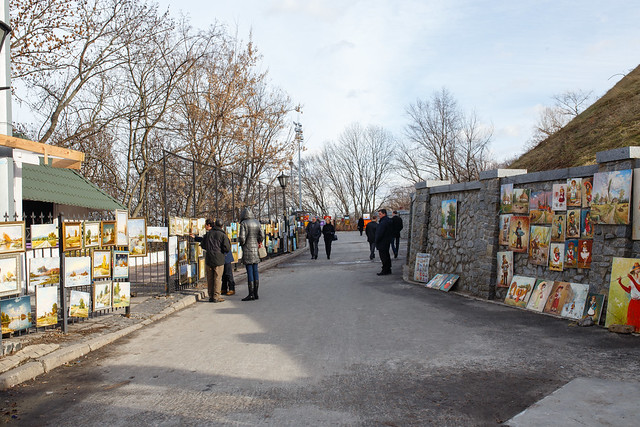 The Andriyivskyy Descent is full of art and unique shops. It’s a fascinating area. 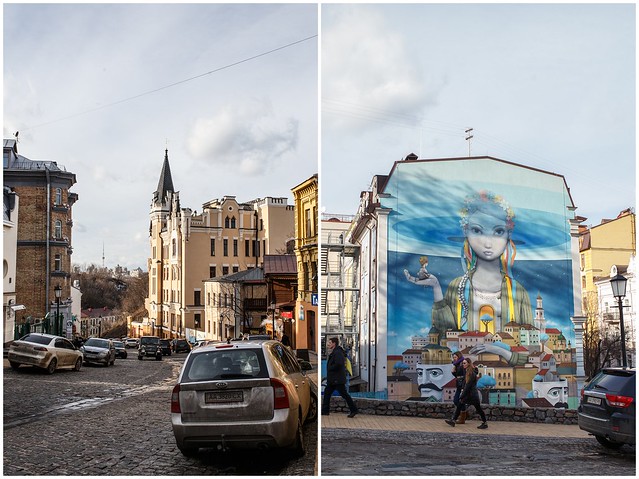 We walked by the lower station of the Funicular, which I shared about us taking last week. 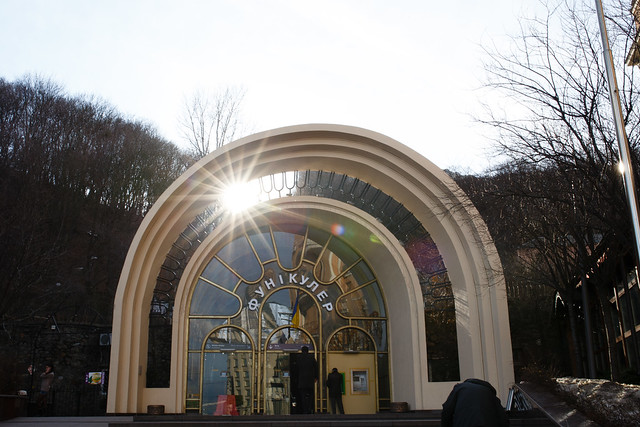 From here, we hopped on the metro. However, I had been looking at the map on my phone, not the metro map, and got us a bit lost. Not no-clue-where-we-are lost, but oops, we need to get off and find the right station lost. A couple of transfers, and we got where we wanted to be.

This is the inside of one of the older metro stations, Zoloti Vorota (Golden Gates). All of the metro stations are very unique looking– this one is more traditional Ukrainian looking, compared to the stations which look more Soviet, or more modern. 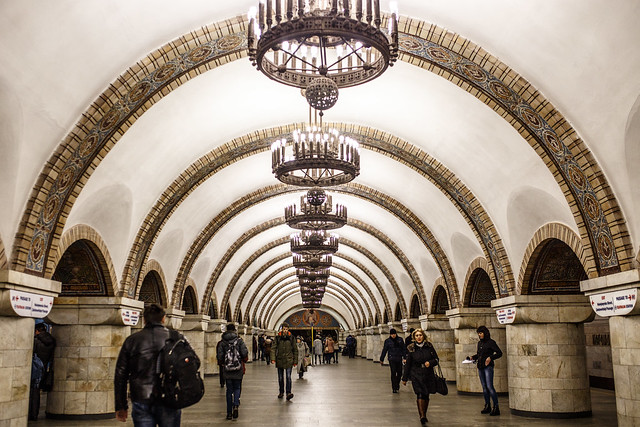 We got off the metro at Arsenalna– this is the deepest metro station in the world, 346ft deep. For comparison, the belltower we climbed earlier in the day was about 250ft. You take two huge escalators to get down into Arsenalna station. 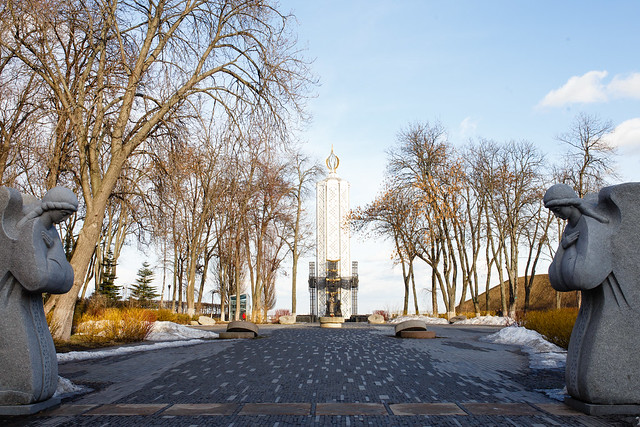 One thing that I really wanted to do today was visit the Kiev Pechersk Lavra Monastery. It’s supposed to be one of the most interesting places in Kyiv. However, the tour prices were expensive and there wasn’t a ton of daylight left. We opted for the cheapest tickets to grant us access to the grounds, and just walk around a bit. 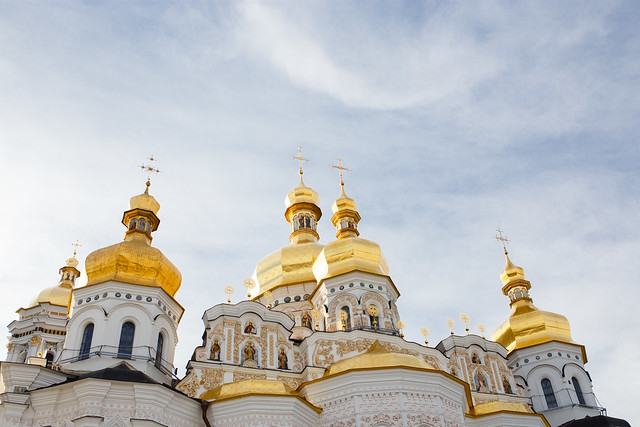 I hope we can come back when we have more time and do a proper tour. 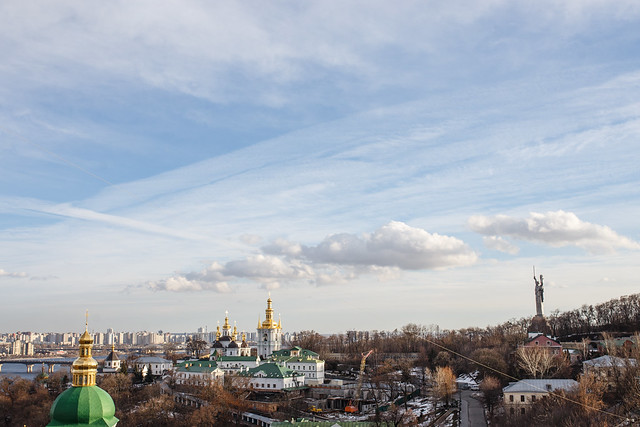 The last thing left on my to-visit list was the Motherland statue. This is part of the World War II history complex.

These are Russian military vehicles, captured during the current war. 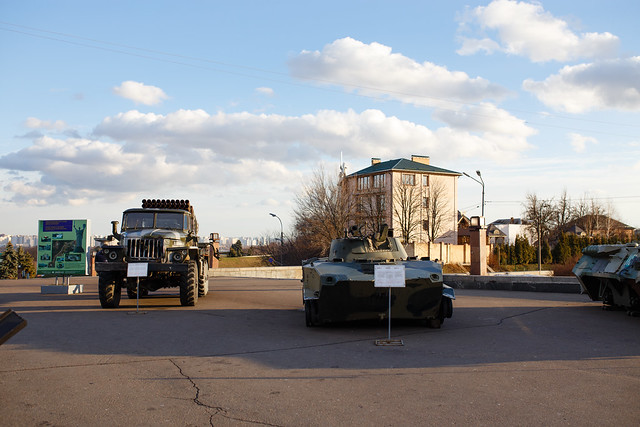 There are many of these larger-than-life statues. To the left, you can see the reddish-colored monuments with city names. These monuments to individual cities reminded me a lot of the Tomb of the Unknown Soldier in Moscow. I’ll be totally honest– I had seen photos of the Motherland statue before, but never looked close enough to realize that it is a Soviet monument, not a Ukrainian nationalist monument. 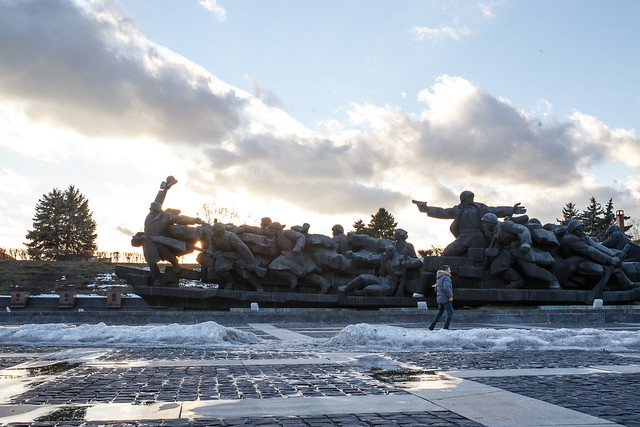 The Motherland Statue bears the emblem of the Soviet Union on her shield.

Whew. That was a day– from there, we headed back to our apartment via the metro. For dinner, I attempted to get varenyky, but was unsuccessful. We did get a last little bit of Ukrainian food at Puzata Hata.

In just a few hours, we’ll head to the airport and start our journey home!