I’m rather glad to check another month off on the countdown to Spring. Just a few more hours left until… March! March, when everything starts to get better. Sort of. We’re supposed to get 3-8 inches of snow this weekend.

Reed and Lena are still munching on their Valentine’s Day candy. She was playing with her candy hearts, organizing them, then messing up her groups.

Gus has been handling Reed and Lena eating candy around him everyday pretty well. He reacts to Red Dye 40, so even if they wanted to share with him, I wouldn’t let them. He doesn’t entirely get that candy is superior to other food yet, so he hasn’t been bothered by it. But, today, he came over to her while she was eating and said “I hungry, Vya. I hungry.”

February Photo a Day. I never got out to do more star photography, unfortunately. There are also a few instagram pictures, but that’s what it comes down to sometimes. 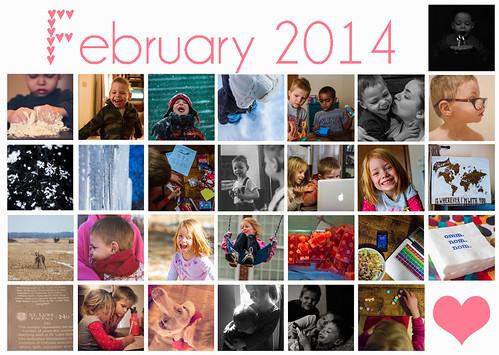