We didn’t have anything that we needed to do today, just another day of waiting for Lyuda’s passport.

We spent the morning waiting around for the building inspector to come do a test of the sewage system, and then another guy to come fix the TV. Once we could finally leave, we grabbed lunch at a very busy Puzata Hata.

From there, I had a little walk in mind.

Lyuda sitting down and sharing a drink with a statue. 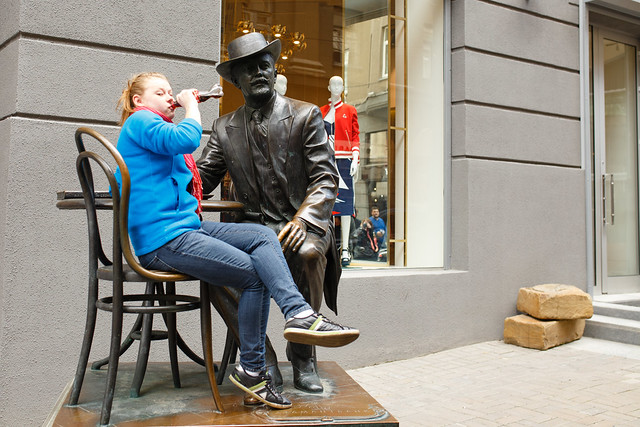 Back up Institutka, past the National Bank again. 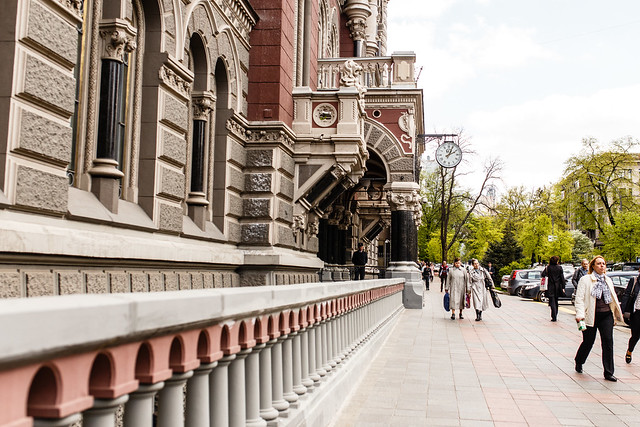 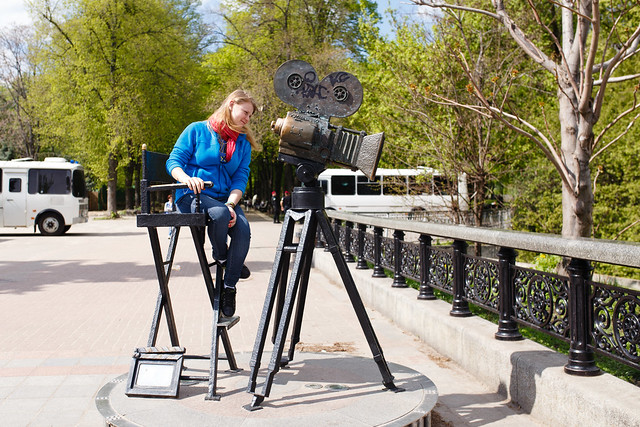 My mom wanted to see Mariyinsky Palace, the ceremonial residence of the President. Unfortunately, it was all under construction. However, we did see tons of soldiers boarding buses. 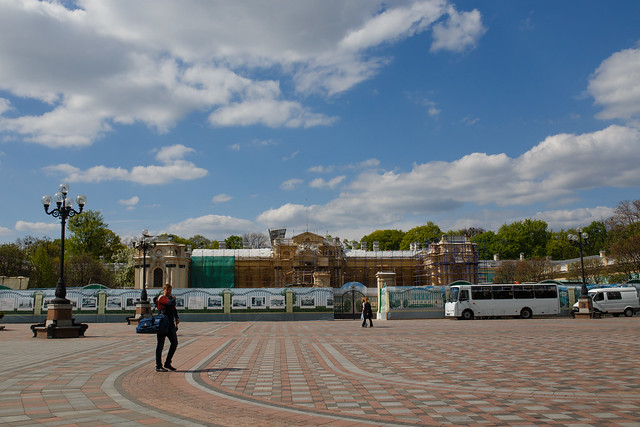 We walked down another street, past many well-guarded government buildings. 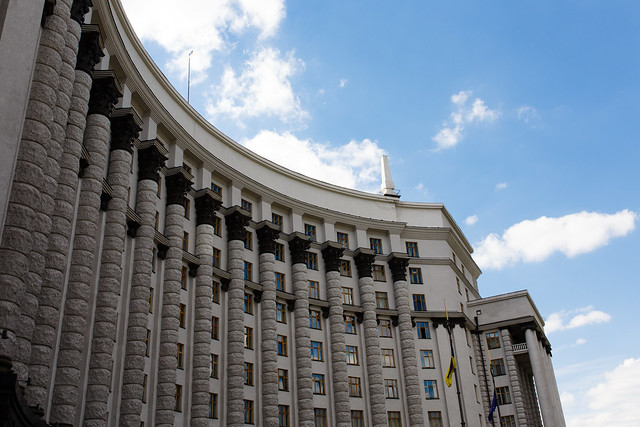 I wanted to go by the Dynamo Soccer stadium. For Reed. 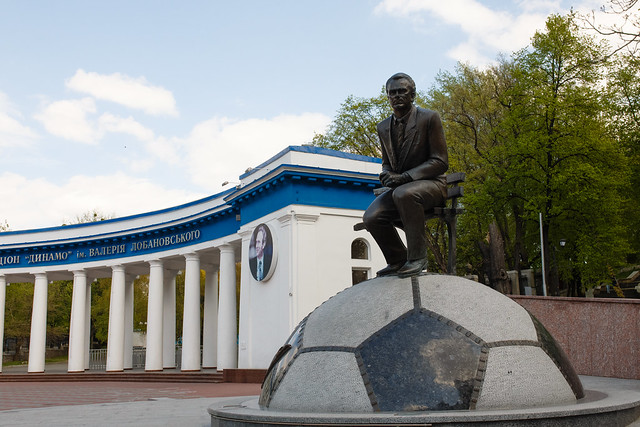 A memorial to Serhiy Nigoyan. He was the first protester shot and killed during the revolution in 2013/14. Have I told you to go watch the documentary Winter on Fire yet? It is a must see, although not kid friendly. Available on Netflix. 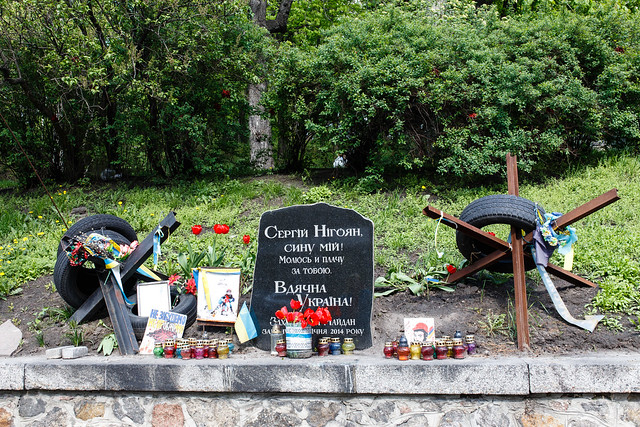 Next we walked to the Friendship of Nations Arch, originally built during the USSR times, and now apparently a symbol of the friendship between Ukraine and Russia. It’s lit up in a rainbow at night, perfect for the anti-religion USSR and/or the homophobic Russia. Take your pick. 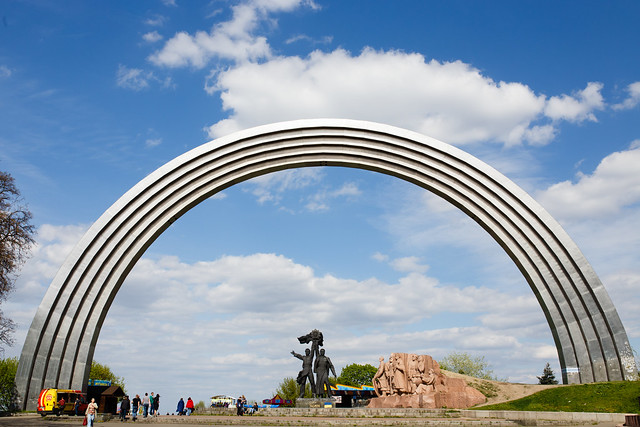 The Friendship of Nations Arch is right along the Dnieper River, which you can zipline across. No thank you. 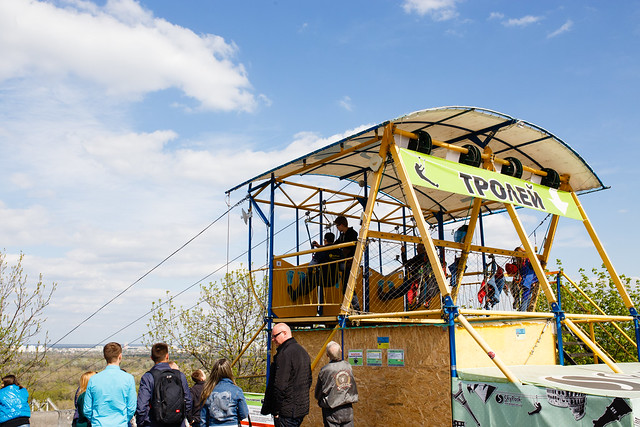 Some cool graffiti found on our way back to our apartment. It says “United Colors of Ukraine”. On the left side is a coal mining hat, which represents the Donbas region, where Reed and Lena are from, an area which is currently the warzone. If you like these, you can see more here, use the arrows at the bottom to scroll through them. 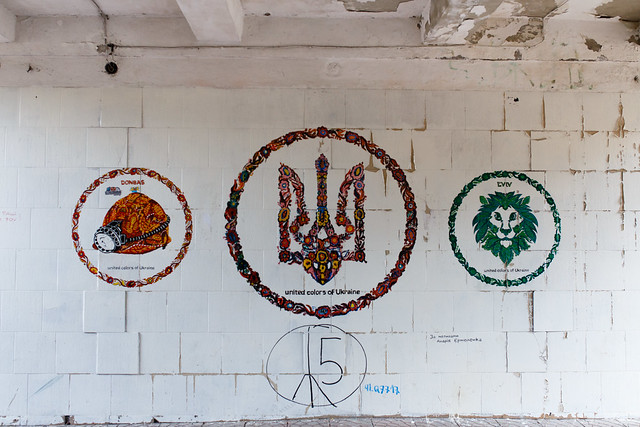 We only went back to our apartment for a few minutes for I made them go out again.

Statue with a migraine? I feel you, man. 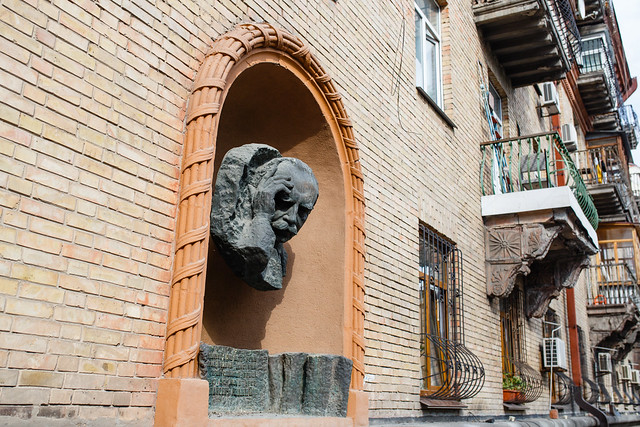 I wanted to go back to St. Michael’s Golden-Domed Monastery. 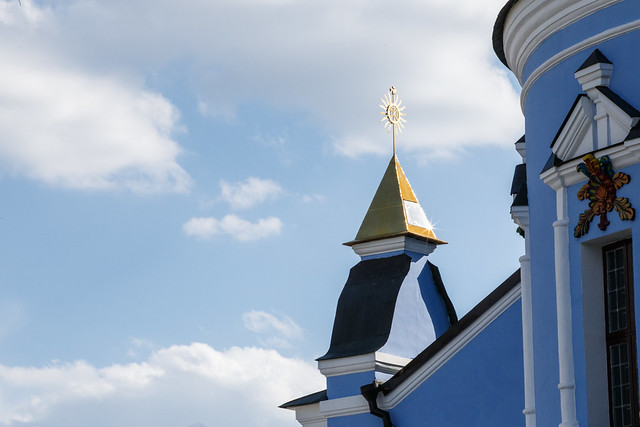 Painting the trees. Wondering why? Read here. I’ve asked many Ukrainians and gotten the same answer. 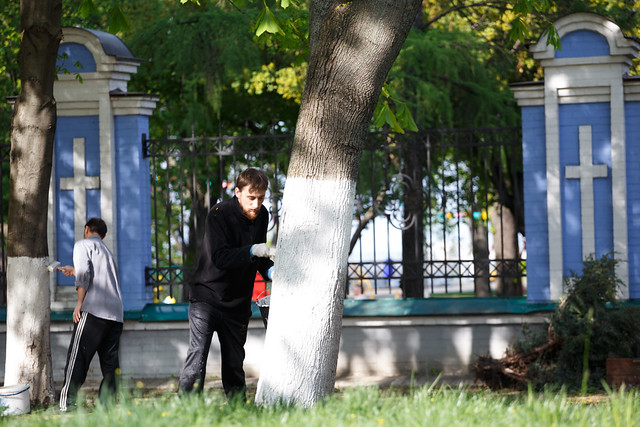 I wanted to take some pictures. She is eating sunflower seeds and staring me down. 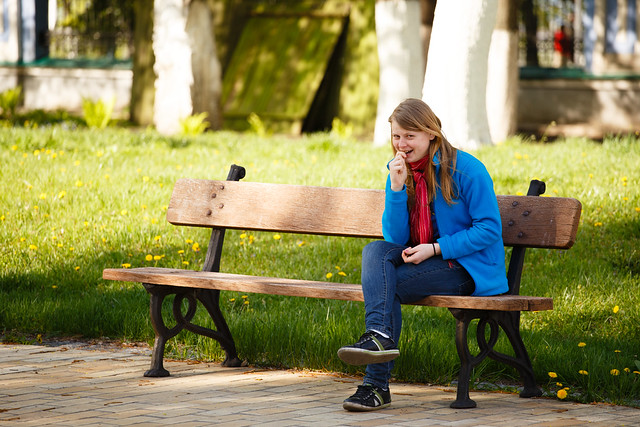 I had this picture in my head two weeks before I actually snapped it. The monk dressed in black, up against the bright blue walls. Some of the monks are older, with long hair and heavy beards. But there are many like this one, who are very young. In case you are also curious why the monks wear black. 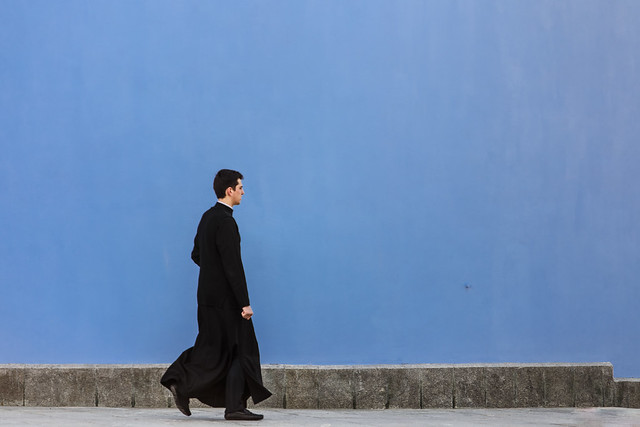 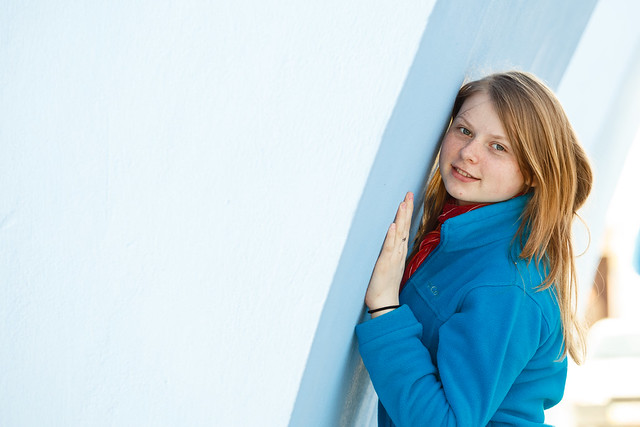 A motorcycle, parked inside the belltower. 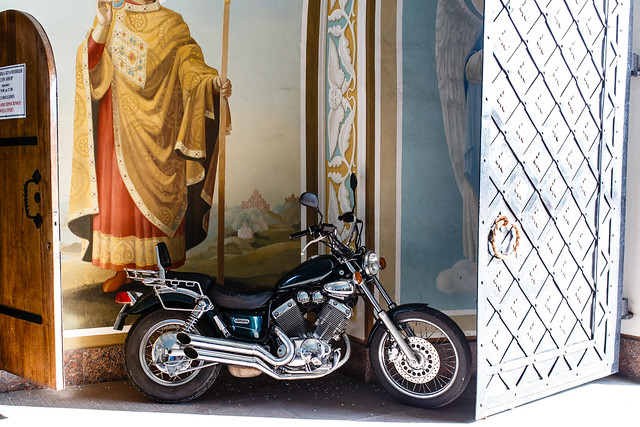 We went back down the sculpture alley that we visited last week, but I was more into the murals than the sculptures today. Except that these guys needed to be photographed. 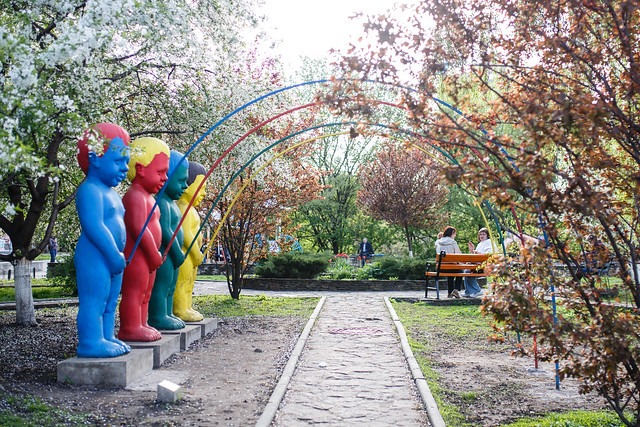 Literally, the mural on the right depicts St. George slaying a dragon. However, but I think there’s a lot of symbolism here, as George is displayed as a Cossack, killing the greedy hands trying to take his land.

We visited a famous little hedgehog. 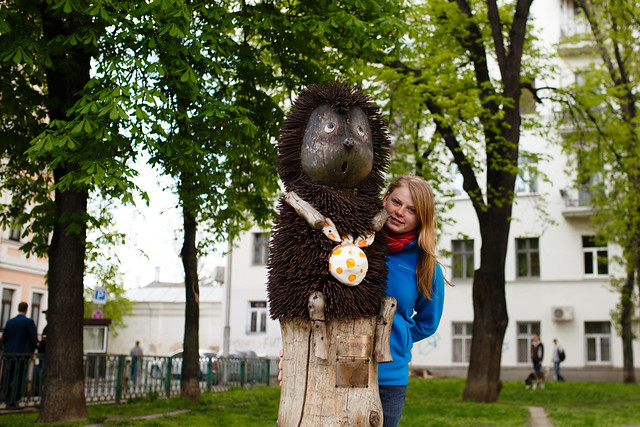 We wrapped up the night with pizza and ice cream. 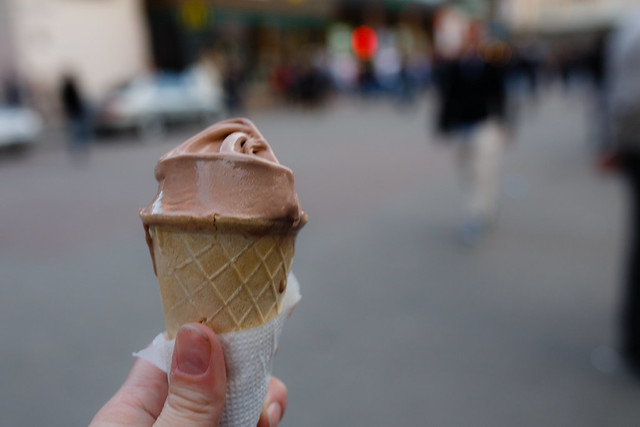 To everyone knows that my mom doesn’t eat sugar or much dairy, that is bean cream (like ice cream but made from beans) in a dried papaya cone. 😉 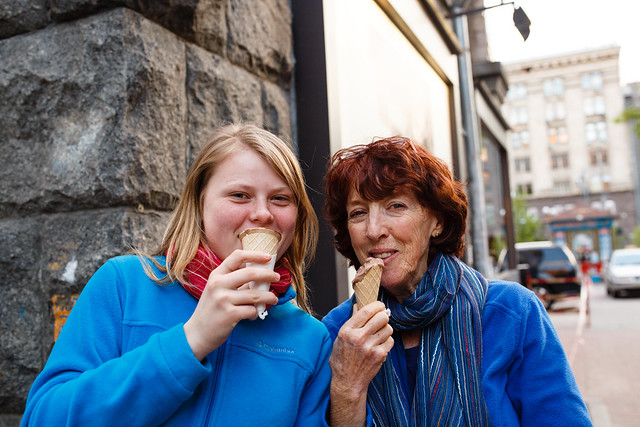 Apparently Lyuda’s passport is ready. However, we need to go to another town to do some additional paperwork before we can pick it up. We have an early morning planned, and a very busy day. Please pray that we can get it all done tomorrow, so that we can head home on Friday! 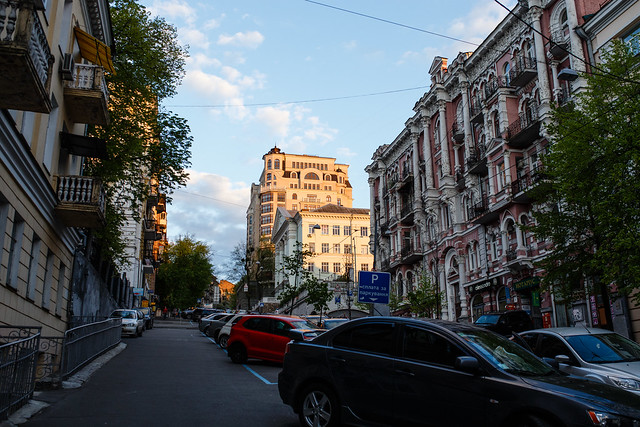