The main thing on the agenda for today was Lyuda’s medical exam. Olya was meeting us, and together, we would take the metro. The metro was jam packed this morning, but fortunately we only needed to be on it for a few stops.

We visited a different medical center than the one we took Reed and Lena to. This one was fairly new, but smaller than the other. When we walked in, I pointed out a sign to my mom, in English, Ukrainian and Russian. The English stated: adoption cases take priority, thank you for understanding. I joked that it probably said something completely different in the other languages. 🙂 5 hours later, she suggested that I was right!

The place was hot, and jam packed with people of all ages. There was a running loop of video showing life in Canada, the US, Australia and the UK. We laughed a lot about how different the clip, showing beautiful, touristy areas of the Pacific Northwest, is from real life. Yes, we all drive RVs and spend our days fishing and walking the beaches. Best of all, this video was in French… not the Canadian part, just the American part. Any idea why? Me either.

Lyuda had to get her height, weight, an eye exam, and a brief exam for the doctor. We had a couple of hours of free time. I suggested that we grab lunch. We walked down to Kreschatyk and found a different Ukrainian cafeteria. It was not Puzata Hata, and just so-so. I think I need to make Lyuda go to Puzata Hata at least once more in Ukraine, and in exchange, I’ll take her to McDonalds in the US. We’ll tolerate our fast food dislikes for each other?

We then headed back to the clinic, where Lyuda got her poke for the TB test. Much more time spent waiting than actually with doctors and nurses, but it always seems to be.

Finally, freedom. We headed on the metro back, where I told Olya that we could make it back by ourselves. I don’t think she believed me, as she hesitantly agreed to leave us and told Lyuda which stop to get off at. Maybe I shouldn’t tell her about our Sunday adventures? The metro is very simple in comparison to American cities.

We returned to our apartment, set our stuff down, and headed out again. We wanted to walk down the Andriyivsky descent and check out the souvenir booths.

Found at the top of the Andriyivsky descent. My curiosity won, and Google told me a bit about this about the mural. No real explanation of why this particular scene, but a bit more info. The buildings on the right, my mom mentioned the contrast between the new and old. Lyuda said that the new building belonged in Chicago. Thoughts, Amanda J?

For dinner, we went to the 3B cafe– beer, beef and burgers. If you know me, you are aware that those are not really three of my favorite things.  Lyuda got the double beef burger, the most American of us… I got the vegan burger, which turned out to be a small piece of eggplant, a mushroom and a pepper on a bun.

In a funny anecdote, after we went to apply for Lyuda’s passport on Monday, we stopped for lunch. I wanted a Caesar salad and I requested it “bez meyasom”, without meat. The waiter gave me the most confused look, and I looked to Oksana, wondering how horrible my pronunciation had just been. Until the waiter replied… bez meyasom? No meat? No bacon? No chicken? He had understood me just fine, but was shocked that I didn’t want meat. Oksana later pointed out the chalkboard on the wall, which read, “Any vegetarian meal is tastier with meat”.

Cynthia, thanks for the suggestion on Cafe Imbir on my recent post. We haven’t checked it out yet, but I hope to go this weekend!

We walked back to find a piano in the middle of the park, where they were playing “Can You Feel the Love Tonight?” 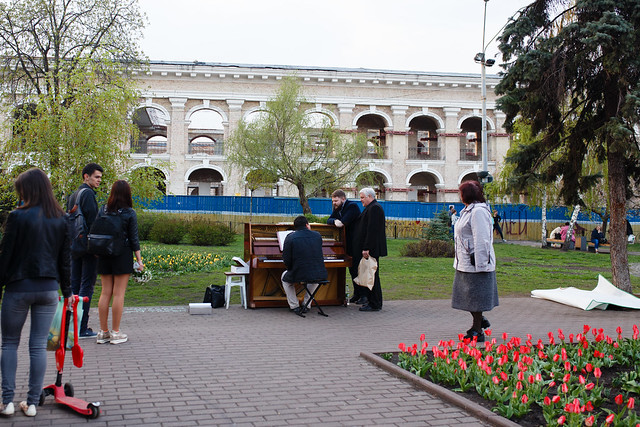 One more little thing to share tonight, I need to brag about Lyuda and her language skills. Despite my Ukrainian lessons, often people don’t understand me, or they speak in Russian, or any number of scenarios… she is now at the point where she will jump in and translate. She will clarify our dinner order, ask where something is in a store, and she even got a “sale” for us today from a street artist. She is getting much bolder with her English and translation skills, out of necessity and desire to help us. ❤ 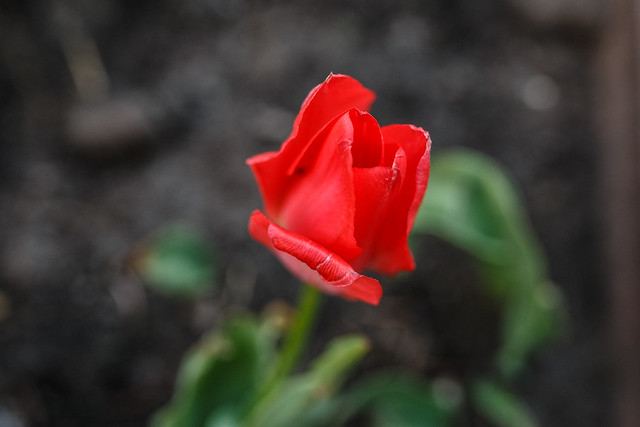