As we zoom of our town, the one where our hotel is, I watch the familiar sites go by. The school, the store, the bus station, the train station. This is a small Ukrainian town, but it has the same amenities as any small American town, perhaps even more. Our driver jerks one way to pass a truck, then back into our lane. While his driving is typical of how Ukrainians drive and doesn’t feel particularly unsafe, it is fast and makes me feel a bit like we’re in some sort of race. The Fast and the Furious: Rural Ukraine. 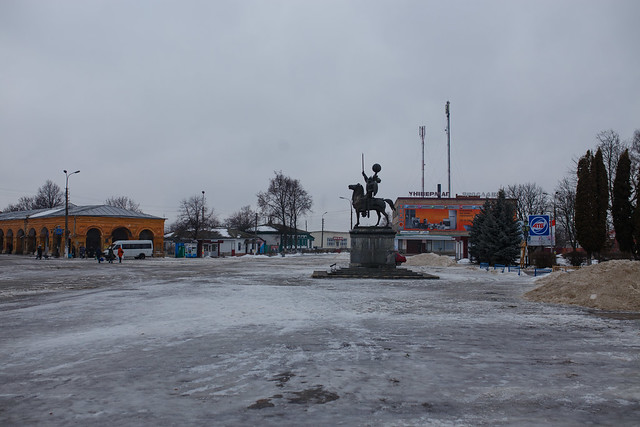 I think, “the roads aren’t too bad today”. Yes, bumpy, but they look clear. I could almost blur my vision and pretend we’re in the Midwest of the United States, near home. But, the houses are different, and occasionally, I can see the onion dome of a cathedral in the distance. We begin to get into “the forest” as they call it. This is where I lose cell reception, until we hit the part where they’re currently harvesting trees. There’s a cell tower here, so for the few minutes we zoom by this area, I have perfect reception. 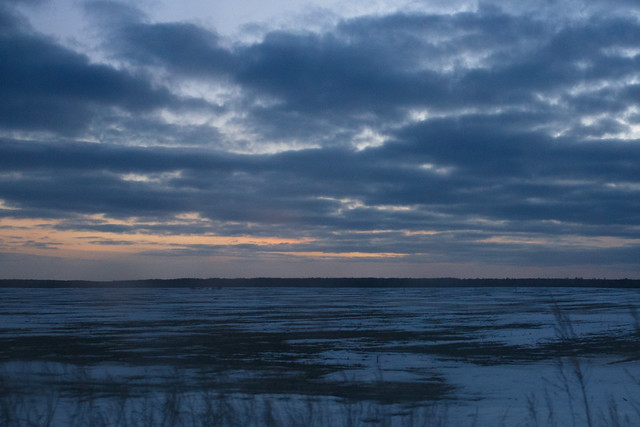 Eventually, I see the sign… Orlivka, 9. I’m guessing this means 9km. That sounds about right. The driver slows now, turns off carefully onto the ice-covered road to Orlivka. I was wrong– the roads are still bad. We bump along, forest, then open fields, more forest, open fields. Many signs warn us about forest fires. No Smokey the Bear, but there is a sign with a horse running through a blaze.

We continue bumping along until we see the sign… in Ukrainian, it says “Welcome to Orlivka”… it’s old and battered, but pictures some bread and vegetables next to these words.

This town is like nothing I’ve ever seen before. It’s something beautiful, like something I’ve read about in fairy tales. As we enter the town, just past the welcome sign, are two houses with a horse and cart in front. 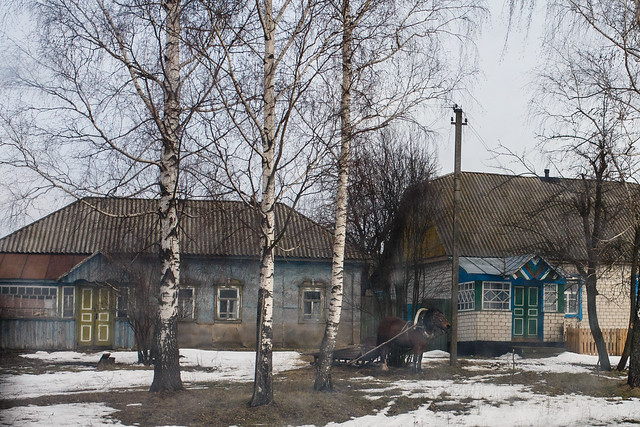 The driver zig-zags down the road, avoiding potholes. While the houses are beautiful and colorful, with ornate porches, they are also all in disrepair. All of them. A few have satellite dishes, but most look untouched by modern amenities. The cars are few and far between, but the house drawn carts are numerous. We always see at least one each day on this last part of our drive. Today, we saw three. 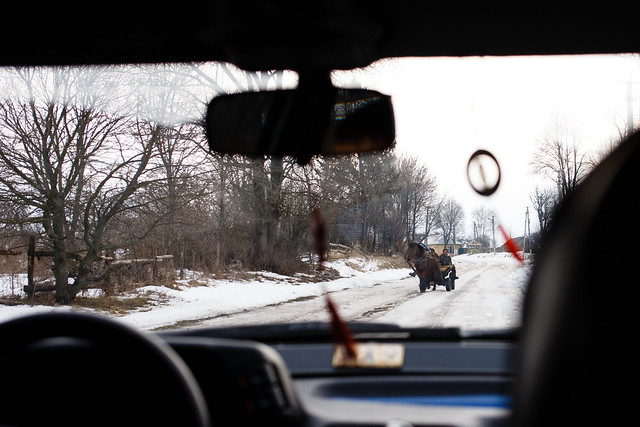 I cannot wrap my brain around the combination of beauty, whimsy, and poverty that was see as we drive by. I feel a bit like a time traveler, who someone ended up at the turn of the 20th century. 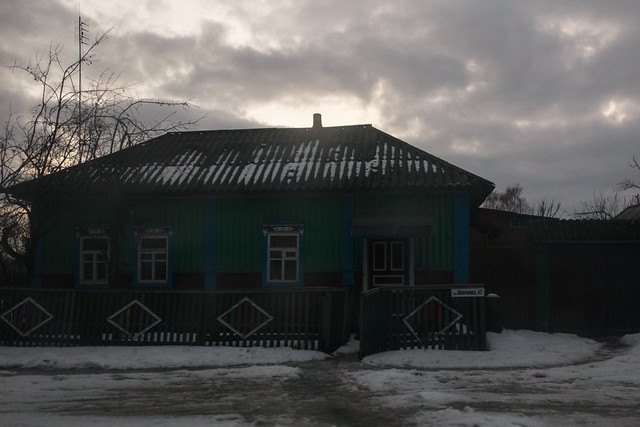 We bump and zig zag along, out of Orlivka, down the road to an even smaller town, where the orphanage is. I wonder who lives here, but I assume it must only be the orphanage staff. Although there are only 36 kids here, they have a very large staff and I have no idea what most of them do.

When we pull up, the children are wondering around. Some nod, or even smile and wave. The brave ones say hello, or good day… and the bravest duck their heads out of doors quickly to say “Good afternoon!” in English. This makes me laugh. I wish we could give them all hugs and a warm meal. It’s not an issue of money. Food here is cheap, but the orphanage staff would never allow us to bring it. 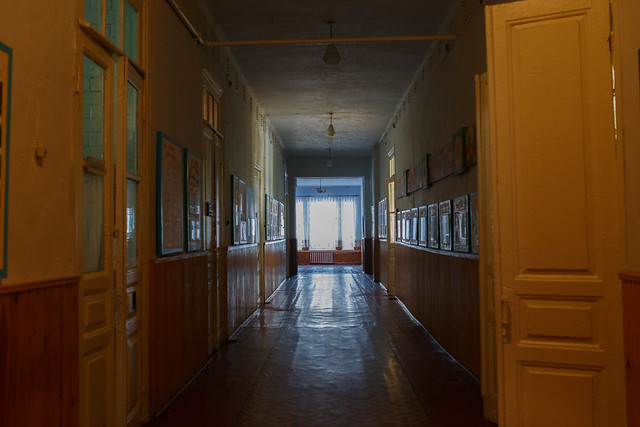 Lyuda is no where to be found. However, her friend N appears. He says hello again. I want to hug him– he looks like he needs a hug, but it seems inappropriate to hug a 16 year old boy I just met. We have an awkward conversion, where again, he tells me how much he wants a family. I’ve told him he’s told old to be adopted by Americans (due to US laws), but he is asking me to help him to get to the US for the summer. Yes, I might be able to get him hooked up with a hosting program. Even if he’s not adoptable, I think he could benefit from the love of a family for the summer.

N runs off to find Lyuda for me. In the mean time, O shows up. She is so happy to see us again. I ask about her hand– yes, it still hurts.

We’re ushered in to the room where we normally go, but this time, the male psychologist isn’t there. Instead, a female psychologist sits in with us. She won’t let N or O to join us. We play Skip-Bo. We brought Lyuda boots, as she said her others were broken. She’s still asking about a phone, and I’m still refusing. So, the boots are partly a goodwill gesture. When the psychologist goes out of the room, I also hand her some candy to share with her friends (she doesn’t like candy much) and sunflower seeds for herself. No official has told us that food is forbidden yet, but I know this from other families. 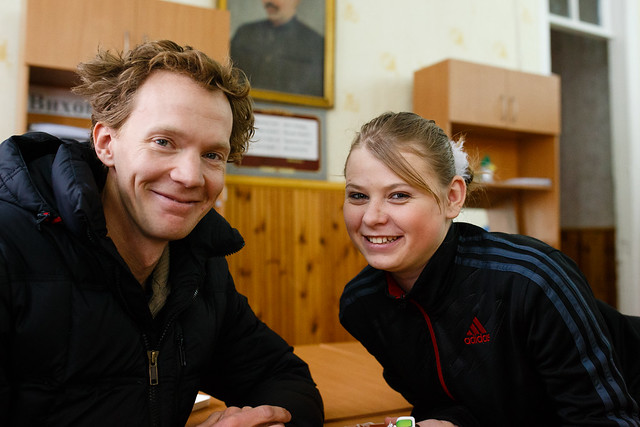 The psychologist asks how long we’ll stay and we agree on two hours. She likes this, because it’s the time that she is done for the day. She seems nice, often smiling at us, but she sticks to the rules. Lyuda seems to like her too. 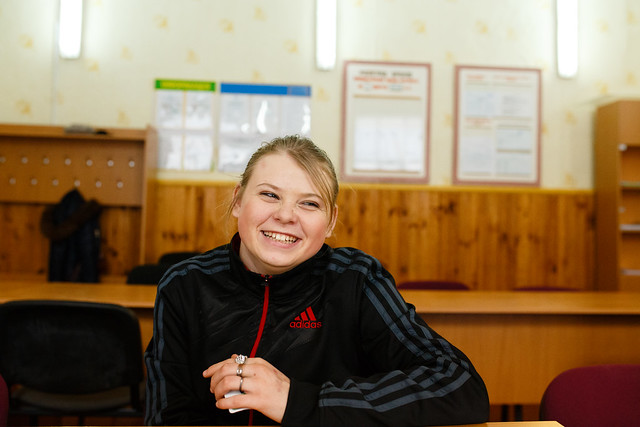 The time goes by quickly. We finish our game a few minutes early and decide to go stand outside. Most of the walking areas are an ice rink– just completely ice covered. We stand on the porch to avoid slipping and sliding on the ice. As we stand there, all of the orphanage workers begin approaching and standing around the porch. They are all glancing unpleasantly in our direction. Lyuda says, “Director will talk”… and then I realize they’re waiting here for the orphanage director to come and make some speech from the steps of the porch. We move down to the car and say our goodbyes. 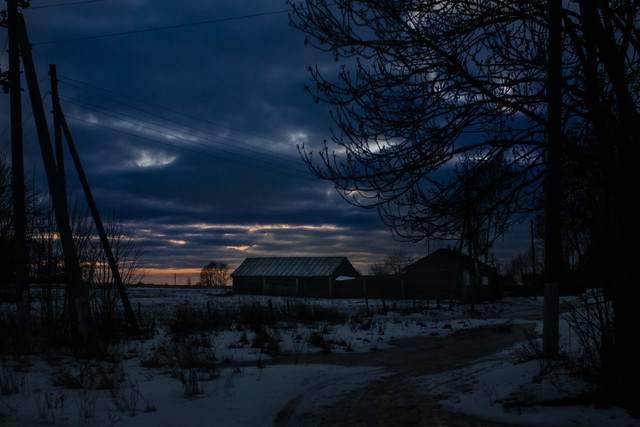 We bump and zig zag back down the roads, slowly making our way back to our hotel. Again, I watch all of the houses as we pass and I wonder how much longer this place will be here. It feels like we will pick Lyuda up, and as we drive away forever, this place will disappear behind us, crumbling into ruin. A place we once saw, but can never get back to. It looks fragile and fleeting, yet I know there must be a stubbornness and perseverance that holds up these homes. They know how to survive.

5 thoughts on “Observations of Rural Ukraine”