One of the most important lessons I’ve learned about parenting is to think creatively.

Gus had been hating baths for quite awhile, about 6 weeks, if I remember correctly. He screamed if we tried to get him to take a bath or a shower, like something horrible was happening to him. Before this, he had been enjoying baths, since I made bath paint, so we’re not sure what happened. Either way, it was very frustrating, obviously not a good experience for him, and  time to make him like baths again.

I had an idea– to buy him a bath toy. But, this never works well if I intentionally drum up excitement with him. If we had gone to Target and I had said, “I will let you pick out any bath toy if you will take a bath”, he probably would have agreed at the store and then when we got home, just stared longingly at the toy while telling me “no thanks” on the bath. In my experience, it needs to be “his” idea.

Instead, I bought a $4 pack of bath crayons without him knowing. One evening, I took the crayons and sat on the side of the tub (fully clothed– in case you weren’t sure 🙂 ) and just started drawing all over the walls.

After just about a minute or two, Gus came looking for me. “Whatya doin, mama?” “Just coloring.” “Can I color?” “Yes, but only in the bathtub”. “Okay”. So, I put him in the bathtub, fully clothed. Almost instantly, he said “Can I have pants off?” “Sure!” But, keeping his shirt on, in a totally dry bathtub, he colored. I kept on coloring, too, like I was just enjoying myself and this was what people do– sit on the side of the bathtub and color.

After several minutes, I got up and got my camera and took a few photos of him. 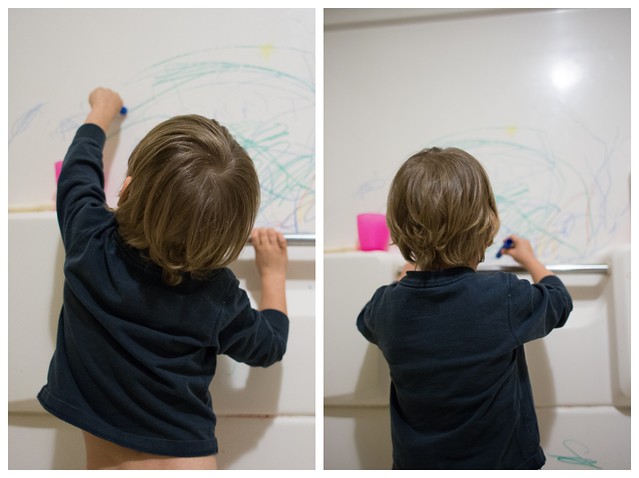 In his own little world.

He kept turning to me and saying “whatya fink, mama? whatya fink?” 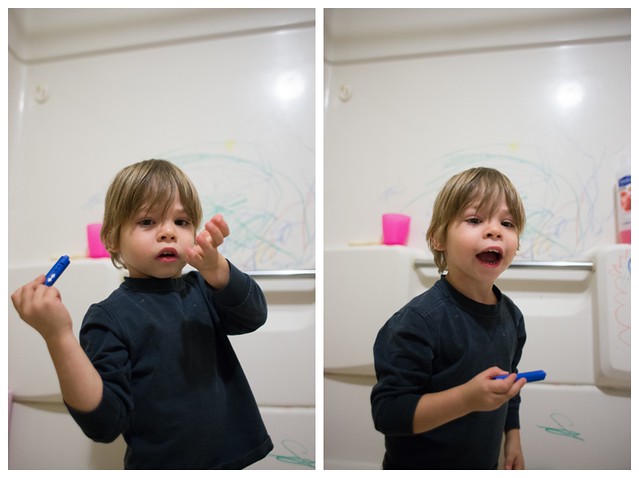 And, after a few more minutes, he said “Mama, can I have some bubbles and maybe some water?”

Bingo. That is exactly what I wanted!

And since then, he’s been regularly asking me for baths. One day, I picked him up at school and he informed me, “I need to take a bath tonight.” After we had been in the door for about a minute and it wasn’t even noon, he said “can I have a bath now?” My personal belief is that there’s no bad time for a bath, so of course he got it!

Although he’s enjoying them again, I’m being careful to be completely respectful about his wishes around bath time, taking him out just when he asks or letting him decline a bath if he doesn’t want to take one a particular day.

I love a little parenting win. I don’t expect things to always be this easy, but it’s nice to get it right for a change with just some bath crayons and a bit of patience!