Today, we have my beautiful friend Gina sharing about her daughter Sabine. Gina has a beautiful story and a beautiful daughter, so enjoy learning more about adopting and parenting a deaf child. 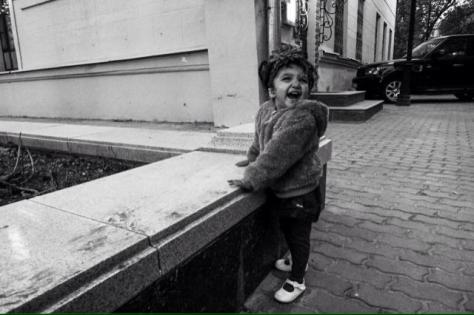 My name is Gina and I started the process to adopt as a single woman with no other children. Having many friends who have adopted kids with special needs, I felt pretty comfortable with most special needs. I had nearly finished my adoption of a Russian toddler who was HIV+ when Russia banned US adoptions at the end of 2012. I filed with the European Court of Human Rights and fought for my little girl in Russia every way I could. 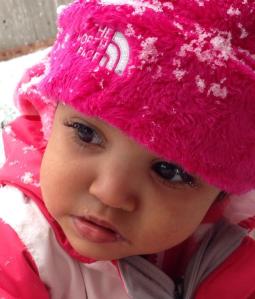 Simultaneously, I started a second adoption in India for my daughter Sabine who is deaf. I used to work at a summer camp for the deaf, at a deaf school, and as an interpreter for the public school system, so I felt pretty comfortable starting the process to adopt a child with hearing loss. (Side note: most people who are deaf or hard of hearing do not use the terms “hearing impairment” or “hearing impaired” because they don’t view their hearing loss as an impairment, simply as a difference. The terms deaf or hard of hearing are preferred.)

My daughter’s file listed her as bilaterally profoundly deaf, having microtia of one ear (ear deformity), and having a rare spinal cord injury. She was 11 months old at the time and there was very little info as to whether she was expected to walk, etc., as the spinal cord condition is often progressive and can lead to paralysis. It can also cause no symptoms and remain stable, so her prognosis was really unknown.

When I picked Sabine up from the orphanage at 21 months of age, her eyes were glazed over and she barely responded to her surroundings. She could sit up independently but was wobbly and fell over. She did not react to any sound at all and I was certain the diagnosis of bilateral profound deafness was correct. She would not even look at a toy placed in front of her face, let alone reach for it or play with it. She was terrified to be fed and would only take food or drink through a syringe for the entire first week I had her. The bath or water of any sort scared her to death and she would cry and cry, clenching her whole body up in fear. She lived in the Ergo, snuggled into my chest, quite literally 24/7 at first. I often slept sitting in a chair or propped up in bed on pillows so she could stay in the Ergo, because taking her out resulted in terror again.

Gradually, Sabine began to trust that she was safe and loved, and the glaze started to lift from her eyes. Slowly, she would take a spoon or the cap to a bottle from my hand and hold it in her hand (anything else overwhelmed her). She let me set her down and with one eye always on me to make sure I wouldn’t leave her, started to quietly explore her surroundings. Suddenly she was crawling all over the place, learning to climb stairs. Six days after we left the orphanage, she took her first independent step. A few days later she started eating solid food and drinking from a glass. Her development just exploded and hasn’t stopped yet, three and a half months later.

A few days after we returned to the US, we saw the audiologist. Sabine was scheduled for a sedated ABR (auditory brainstem response) to verify the level of her hearing loss. We started therapy at the feeding clinic to help her overcome her feeding trauma. We saw the neurologist, who scheduled her for sedated MRIs of her entire spine and head, and the ENT, who added special requirements to the brain MRI to evaluate her inner ears. We were sent to the craniofacial surgeon to check for any palate concerns that can be seen with microtia. We started Early Intervention and saw the pediatrician.

A month after we had settled in at home, Sabine underwent her sedated tests all on the same day. We were shocked to learn that her hearing loss in one ear is only mild to moderate, and that she does not have the spinal cord condition we were told she had! A few days later she was fitted for her first hearing aids. My insurance covered most of the $3000 cost for the hearing aids and they are covered by warranty for three years.

When the hearing aids arrived, the audiologist put them in Sabine’s ears and hooked them up to a device to check that they were working properly. When the device started making sound, Sabine’s eyes went wide, she got very still, and then started laughing. She was hearing! Within a few weeks she was wearing her new hearing aids most of her waking hours.

Shortly after getting her hearing aids, Sabine began to respond to sounds. She began to be able to isolate sounds, like someone clapping, and would look to find the source. The biggest surprise was that her increased response to sound continued even when she wasn’t wearing her hearing aids! She now turns when you call her name or clap, whether or not she’s wearing her hearing aids. It was like everything was so muffled and faint before that she completely tuned anything she was hearing out, but with amplification she was able to decipher sounds and find their sources, and the next time she heard the sound she understood it. 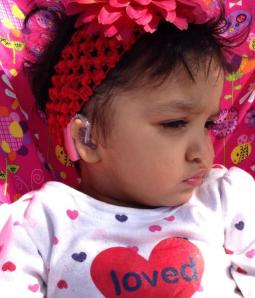 One thing I think is important to remember when parenting a child with hearing loss is the child will always be deaf or hard of hearing, even if they do well with cochlear implants (CI) or hearing aids (HA). Sabine broke her hearing aids the other day and they haven’t been fixed yet, so she’s had several days without them. She takes them off in the car, when she’s swimming or bathing, and when sleeping. She needs help to decipher the sounds around her and it doesn’t come as naturally as it does to hearing children. I think we do a disservice to our children with hearing loss if we assume that their hearing loss is gone with HA or CI. I feel very strongly about providing the child access to sign language so they can communicate 100% of the time – not just the hours of the day when they have their CI or HA.

There is a lot of controversy in the Deaf world about cochlear implants. Many Deaf adults see it as trying to “fix” a child who doesn’t need fixing. Personally, these are my feelings: my child is not broken and doesn’t need to be fixed. I can easily use sign language to communicate with her. However, most of the rest of the world does not sign fluently, including our extended family. Sabine seems to love to be able to hear, and she definitely wants to communicate with everyone around her who doesn’t sign, so if she is a candidate for a CI in her ear with profound hearing loss, I may go ahead and get the CI for her. Or I may not…it’s a big decision. In the meantime, she is doing great with her HA as well as learning sign, so we’ll see which direction turns out to be the best for her as she gets older. 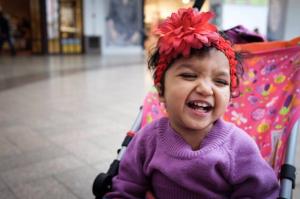 There are a few things I feel strongly about in my personal situation parenting a child with hearing loss. First, I don’t want Sabine to ever feel like anything is wrong with her. She is too young to attend the deaf preschool, but they allow us to visit so she can socialize with other deaf kids and see them signing. I think it is important to normalize her experience with signing and hearing loss.

Secondly, I want her to have access to both the Deaf culture and the hearing world. This is why we both sign and utilize hearing aids, why we will soon be starting speech therapy. I can easily sign with her, but it is important to me that she be able to communicate with all the people who love her. If learning to speak and understand speech is too frustrating for her, however, I won’t push her. Instead I’ll encourage our family and friends to learn more sign language, as I feel strongly about not forcing the child to adapt for the adults. I had intended not to pursue speech at all, thinking she was profoundly deaf, but given her mild hearing loss in one ear I do think Sabine will be able to communicate through speech. I think you have to be willing to be flexible and not push the child into any one way of communicating. So much depends on each individual child and their personality and abilities has to be taken into consideration. 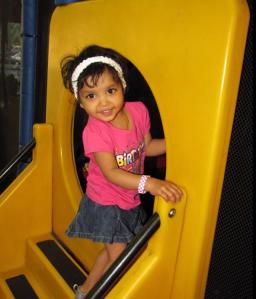 Overall, Sabine’s deafness only really impacts the way we communicate. There are audiology and speech therapy appointments, and special considerations for schooling and communicating. But at the end of the day, my little girl is a kid with a big personality, who loves to learn new things and be on the go, and who no matter what WILL find a way to let me know what she wants or needs. She has charmed absolutely everyone, from random strangers at the park to her family and therapists. Adopting her was by far the best decision of my life!!