Today was good. The first news was that we wouldn’t have any delays– we would be able to pick up Lyuda’s referral in the evening.

My Ukrainian teacher took us on a little walk around the City Centre. We walked by the churches we saw yesterday (St. Sofia’s, St. Michael’s and St. Andrew’s) and half way down the Andriyivskyy Descent before we decided that we might be risking life and limb with how snow packed the sidewalks were and how steep the hill is. The Andriyivskyy Descent is an old, historic street which is lined with art galleries and people selling souvenirs. I think it would be a very interesting place to visit when it’s not covered with ice.

After we visited that area, we went to see the Golden Gate— a historic wooden gate in the middle of the city. We then walked down Kreschatyk, up a side street lined with performing arts– the philharmonic, a movie theater and a theater for plays. We walked up to the back of the Rada, the Ukrainian parliament, which unfortunately was closed off to visitors. We also saw the Gorodetsky House, which is right next to the Rada building.

After we said goodbye to Sveta, we met with Oksana, one of our facilitators, briefly to pay for their services (they wanted to wait until we had resolved the issues I mentioned yesterday) and also discuss our plans for tomorrow.

After Oksana left, we had a bit of time before heading to pick up the referral papers. I wanted to get a few things I hadn’t seen at the small grocery store nearby, so we planned an excursion. We decided to take the metro to a large store (imagine Costco size/style, but not buying items in bulk). We used to shop at this same chain when we were here during Reed and Lena’s adoption. 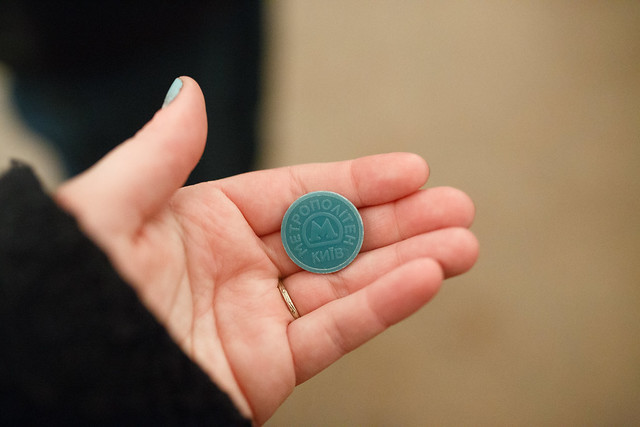 First stop was purchasing tokens for the metro. I had read in a guide book to simple say how many you wanted and hand them the money– each trip is 2UAH each, which is about 8 cents. So, a round trip ride will cost you a whopping 16 cents. I managed purchasing the tokens and despite me saying how many I wanted in Ukrainian, she confirmed in English. Lesson of the day: my accent always instantly exposes that I’m an American. 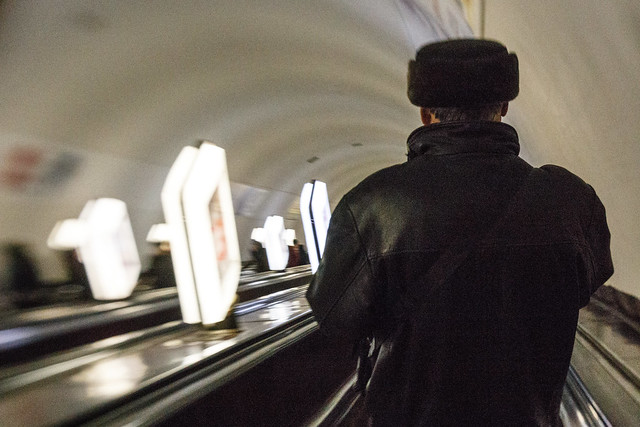 The metro was not too exciting, except that the tunnels down to the station are like entering the center of the earth. It made me a bit nervous, but I still took a few pictures.

We got off at a stop which is a market– it’s full of little stands selling everything you might want. This isn’t souvenirs, like by St. Andrew’s Church. This is clothes, food, even a little salon for manicures. When we cut through an underground tunnel, like the kind I showed a picture of yesterday, I felt a little extra pressure on my bag. I pulled it in front of me, but Aaron asked if I had still had everything, as he was a few steps behind me and saw the entire thing. Three teenager girls tried to reach into my bag. They didn’t take anything, but it was a good reminder to be vigilant. 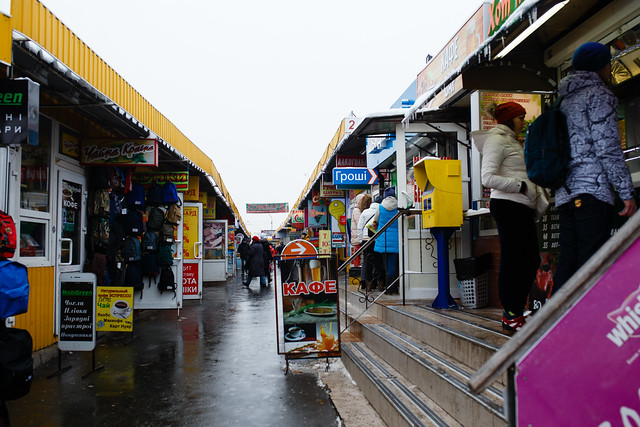 Ashan, the big store, was fun. I was a bit like a kid in a candy store– everything was quite cheap. I failed my attempt at asking if they had the first Hunger Games book, but I’m going to assume that the sales associates hadn’t read the Hunger Games, so they had no idea what I meant when I held up the second book and said, “first book?”.

After Ashan, we decided to take the Metro back and get off a stop early. We had a bit of time before our SDA paperwork pickup, but I was hoping to buy some traditional Ukrainian clothing for Reed, Lena and Gus at the shops outside the SDA. When we got off, I realized that we were at the bottom of Andriyivskyy Descent, not the top. For a moment, I was exhausted at the thought of making out way up, but then I turned and saw the Funicular. The Funicular is on my Kyiv bucket list and I was excited to have this perfect opportunity to ride it. 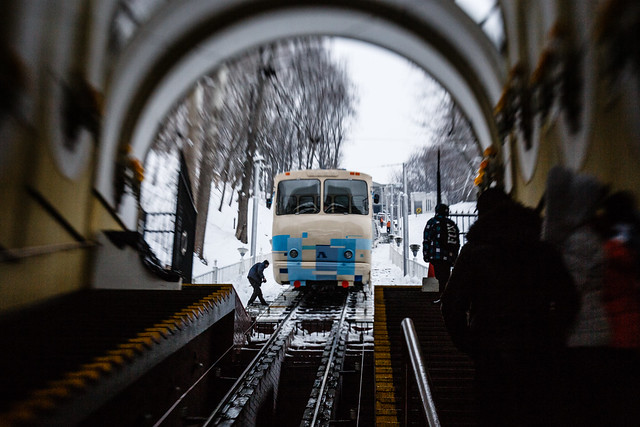 So, what’s the Funicular? It’s a little cable car that carries you to the top of Andriyivskyy Descent– up a very steep hill. That guy is not jumping under it– they were shoveling snow off of the tracks and the steps on either side.

The Funicular dropped us off at the back of St. Michael’s church, which is just a short walk to the SDA building by St. Andrew’s church (yes, there are a lot of beautiful churches in close proximity). Our SDA meeting was easy. The woman who we met with yesterday is nice and speaks English very well. I asked her if many families came without their facilitators and she said, no, we were brave. Ha! But, it was not a big deal at all. She thanked us again for the pictures of Reed and Lena, saying they were right by her keyboard and they looked so happy, healthy and American.

And, drum roll please… we got the official letter needed to see Lyuda with the intent to adopt her!

After we had the papers, we headed back to our apartment to drop off the papers before we had one last adventure. I wanted to go to the book store to pick up another book for Lyuda in Ukrainian. We had another small language confusion, but there was an English speaking woman at the bookstore who helped us find what we needed.

I wanted to go to the top of the mall that overlooks the Maidan. More stairs, but it’s a lovely view at the top. It’s hard to believe that there was a violent revolution here two years ago. Until you see the man collecting money for soldiers and all of the big signs asking to help the soldiers. It’s a sobering reminder that the war is still going on.

Oksana had strongly recommended a restaurant, Puzata Hata (“Fat House”), for us to try. This was our last stop for the night and we loaded up Ukrainian food. I picked a bunch of things, not sure what I’d like. I ended up only eating about a quarter of it, but Aaron ate the rest of my food and all of his. 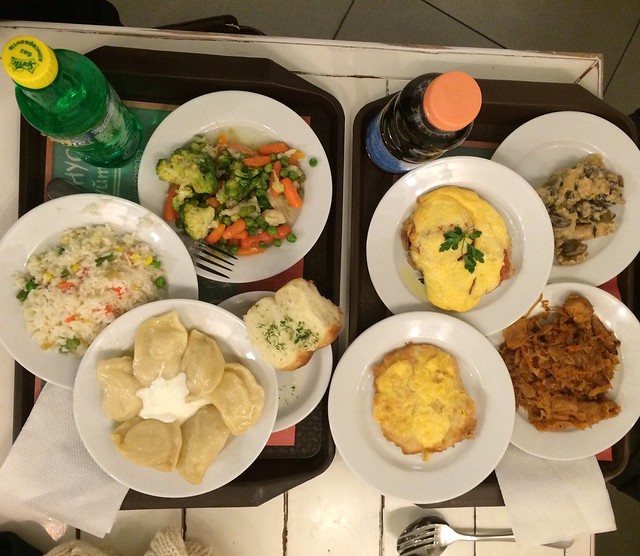 If it sounds like we did a lot today… we did. We walked over ten miles. However, tomorrow will involve sitting in the car and lots of meetings, so I was glad to pack a lot into today. We’ll leave at 6:30 in the morning to drive the 4-5 hours to Lyuda’s region. We will meet with the regional social worker and then we’ll go to the orphanage where we’ll meet with the director and psychologist before we get to see Lyuda. It will be an interesting day!