We have arrived. Our flying was long, but uneventful. We fortunately flew through the Twin Cities, not any East Coast airport, completely avoiding the blizzard. 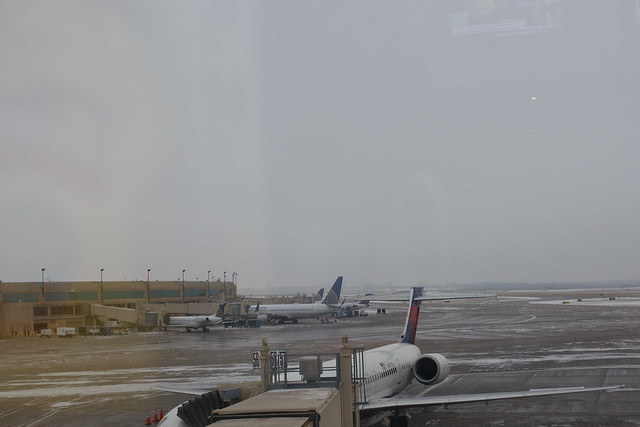 She is so sweet, her English is perfect, and she is very knowledgeable. I’ve spent a lot of time being shuffled from place to place with our previous adoptions. This is not the case with Oksana. It’s more like being with a friend who points out interesting sites and always makes sure that we’re filled in.

From the airport, she took us to exchange money and then we went to our apartment. I chose our apartment for it’s location and great reviews on Air BnB. It’s about half of a block from Independence Square/Maidan, where the protests occurred two years ago, and where the Orange Revolution was 12 years ago. There are a ton of restaurants and an underground mall at this square.

We had a telling moment with the man who let us in to our apartment. He told us how much we owed for the apartment– I already had it in my head to tip him, as he’d carried my suitcase a small distance. So, when the amount we owed didn’t quite line up with the bills we had, I told him to keep the change. He was surprised. It was 100UAH, which is about $4. This was clearly a lot of money to him– Oksana said it was very nice of us, and perhaps as much as he made in a day.

Oksana also took me to get a SIM card for my phone, and showed us the underground mall. We have been here before.

Minus the fact that it’s the middle of the night and I’m awake, everything is going smoothly. While Oksana is the only person from our facilitation team that I’ve met, she has told me good things about the rest of the team. This is in stark contrast to our first adoption, when I felt as though we had been dumped off a remote apartment, with no phone and no clue how to contact anyone and get anywhere. In reality, we were fine, but being that being our first time adopting, it was overwhelming. Even just having a Ukrainian SIM card in my phone and knowing that I can pull up a map from anywhere is HUGE.

In about five and a half hours, we will meet with Olga, who will take us to our SDA appointment. We will request Lyuda’s referral officially. We might get to see some older photos of her and hear a bit more about her history. I am bringing photos of her, Reed and Lena to give them– and perhaps see if they’ll trade me for some of the older photos (unlikely). That is the main thing on our agenda for today. I also hope to do some exploring.