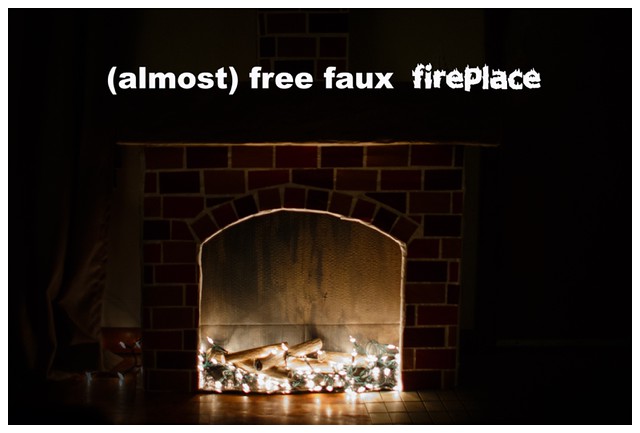 Anyways, I had seen a cardboard fireplace made from boxes, and I decided to make one! There are lots of other tutorials out there on cardboard fireplaces, but since it had to meet my criteria of being from materials I already had and basically free, I just used them for inspiration and then made it up my own as I went. I call it almost free, because I did end up needing to buy a bit more Modge Podge. Considering most of the materials were headed for our recycling bin, I think it’s still a win.

I shared a photo on Facebook and Instagram yesterday and a few people asked me how I went about it. This is my mediocre tutorial– I’m not used to writing tutorials for crafty stuff!! On top of that, I did just sort of “wing it”.  But, perhaps if someone else decides to tackle this project, it will be helpful.

Whew, that seems like a lot of stuff! But, it’s really not that bad– I just grabbed random supplies as I went. I have a few thoughts on how you could substitute different items, especially if you want to make it easier or you need to buy supplies anyways.

Here are the steps:

Some other thoughts and ideas

The end result: I love it. It adds just a bit of silly homeyness to our living room. It’s not a real fireplace, but the glow of the Christmas lights is surprisingly charming.

And, the kids are super excited. Reed said “Thank you for making it! Now I have some place to hang my stocking!” 🙂

One thought on “My (Almost Free) Faux Fireplace”