I am really shy to give photography advice, because I still feel like I have a ton to learn myself.

That being said, I’ve had a few people ask from time to time. While I’m still just learning, I want to help how I can.  I was flipping through my photos from playing in the sprinkler, and I knew I needed to share this. It’s one tip that anyone can use.

The other day, I shared photos of my kids playing in the sprinkler. They were taken about 4 hours before sunset. The sun was still high in the sky and they were not in the shade. This is a challenging time to take photos, because of the harsh shadows that the high sun causes. 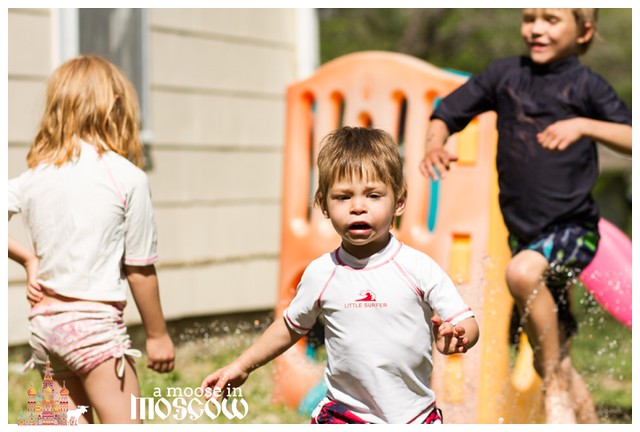 Um, no. Sorry. I would have just deleted that photo if I wasn’t using it for this post. Not just because Gus looks unhappy, but also because those shadows on his face– around his eyes and below his cheeks are intense. Even if he was smiling, it would look awful.

I used to think that there was really no point in pulling out my camera in the middle of the day at all. All of my photos looked like that one.

But. Silly, because all I needed to do was move 180 degrees around my subject. So, instead of shooting from where I was, I went to the other side of the action. 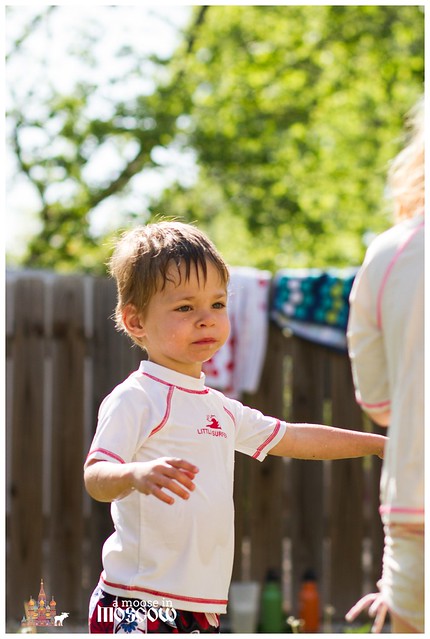 Voila. Do you see how the shadows on his face are totally gone?

I simply moved across from where I was. Do you see the white, green and orange cups? That’s where I had been sitting. Now the sun is behind my kids and they won’t have the harsh shadows on their faces. Super easy. Because the lightening is behind them, they are “backlit”.

The only issue that you may have with this is that your subject may be underexposed, especially if you have a very bright background. For example, someone standing in front of a bright window.

(I shot this in manual, but I asked my computer to tell me what proper exposure was. The left photo is what it thinks is proper exposure for the overall image. The right is the exposure that I set, wanting it to be exposed for Lena’s face, not even overall.)

This is one of the troubles of shooting in auto mode. However, many cameras offer something called “exposure compensation” which allows you to tell the camera that you actually want the photo brighter (or darker) than it thinks that the photo should be. The icon for it is a little plus and minus box. Play around with it, but if you want more detailed information, google “exposure compensation”. Of course, you can also always lighten your photo up with photo editing software, but there are some limitations there.

Thoughts? Do you hate that mid-day sun, too?